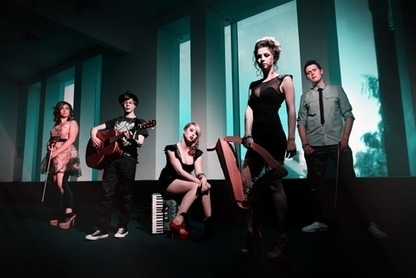 Hot on the heels of St David’s Day, a wealth of Welsh music and traditional folk arts is about to cast a Celtic spell over the capital – in a rare day-long event staged at Cecil Sharp House, London.

A day that aims to capture the essence of the Welsh folk culture, it will be played out across three stages at Camden’s Cecil Sharp House. The family friendly event will hardly pause for breath with non-stop entertainment from lunchtime to late, kicking off at 1pm.

Says trac director DannyKilBride: “It will be a rare chance to totally immerse yourself in the very best of Welsh culture. The exciting project came to us from EFDSS who are keen to reinvigorate their relationship with the traditional arts of the rest of the British Isles. They wanted to know why Welsh acts were not accessing the English markets, how they could find musicians who were doing interesting things with our traditions and how they could help bring a showcase to London. They suggested that we curate a day there and we were delighted to rise to the challenge.”

Leading the pack will be top young “of the moment” Welsh bands Calan (pictured above) and Jamie Smith’s Mabon. The five piece Calan will provide the finale with an evening concert while in the afternoon the award winning “Interceltic” act Jamie Smith’s Mabon will take to the concert hall stage. (2012 Spiral Awards Best Instrumental Album)

Calan, dubbed “the new ambassadors of Welsh cool” have come a long way since busking the streets of Cardiff. They are now festival favourites, blasting their way through old reels, jugs and hornpipes and then seamlessly morphing into mellow and haunting songs.

Taking to the stage at 4.15pm will be the prodigiously talented Jamie Smith’s Mabon, probably one of the best live acts on the circuit. Fast making their unique and vibrant mark on the roots scene with their signature “InterCeltic” music, the five-piece is led by tunesmeister and accordionist extraordinaire Jamie Smith. www.jamiesmithsmabon.com.

Mabon scooped the coveted Best Instrumental Album title (for their Porthcawl-recorded Live at the Grand Pavilion) in the 2011 Spiral Awards, run by music website Spiral Earth – an album that captured all the energy and pizzazz of their acclaimed live show as does the critically acclaimed follow-up album released last autumn, Windblown..

A new diversion for the previously all-instrumental band is the weaving of songs, penned by Smith, into the set – including the aptly named Yes We Sing Now (!) as well as some exciting shifts in style and sound.

But it is Smith’s inspired, eclectic tunes that continue to dominate the material that delves into every Celtic corner – from their native Wales to Brittany, Scotland, Ireland, Galicia and beyond. Watch JSM at Celtic Connections Festival: www.youtube.com/watch?v=iBwk-WNSBw4

That genius of comic rhyme Les Barker will be holding court in the library as he presents “Poems, Chairs and Cynghanedd”. The “alternative Poet Laureate” is Mancunian- born but now resident in Wrexham and a self-declared “born again Welshman”! Festival favourite Les who has learnt Welsh, will deliver his punchy and pithy poems and show how he has mastered the intricacies of writing poetry in cynghanedd –an ancient form of poetic rhyme.

Bragod will bring their magical medieval Welsh music to the party. Instrumentalist Robert Evans and vocalist Mary-Anne Robertson form the only musical ensemble dedicated to exploring the performance of medieval and renaissance Welsh music and poetry in an historically-informed way. They sing Welsh poetry ranging from stanzas of the Gododdin (6th century) to ritual and popular songs of the 18th and 19th century. Robert, who will also deliver a talk-demonstration on the origins of string music, plays the ancient six-stringed lyre known as the crwth.

Other music acts appearing include:

Rag Foundation-The South Wales band have perfected their electrifying brand of edgy, harmony-rich urban folk and have supported the likes of Robert Plant, Billy Bragg and The Levellers. Jack Harris –The 27 year-old singer songwriter from Builth Wells won the 2005 New Folk Songwriting Competition at Kerrville Folk Festival in Texas, the first non-American to do so and has been described as “a priest of song” by singer Anais Mitchell.

Alaw (Welsh for “melody”) features guitarist Dylan Fowler and Mabon fiddler Oli Wilson-Dickson in collaboration with Mabon frontman Jamie Smith. At the heart of their set is a passion for the old tunes of Wales. www.alaw-band.com

If all the music has got your feet itching to dance Huw Williams will demonstrate the art of Welsh clogging www.youtube.com/watch?v=JVgM9OdmbUc and dancers of all abilities are welcome while the Grassie Busville Band will provide the music for what promises to be a high energy afternoon family ceilidh.

There will also be a chance to learn about the Welsh midwinter tradition of the Mari Lwyd (Grey Mare) – a wassail-like, luck-bringing ritual in which participants accompany a person disguised as a horse from house to house , singing in the hope of gaining admittance and being rewarded with food and drink. Children will get the chance to make a mini Mari.

The entertainment will continue in the bar where there will be performances by harmony group Parti Cut Lloi as well as Plus DnA, Cerdd Cegin and Blanche Rowen & Mike Gulston. Bring instruments if you would like to join in – or just your voice!

Great value tickets for the day’s entertainment are £12 adults and £6 for under 12s, Under 2s go free. They are available from www.ticketline.co.uk /0844 888 991 or www./musicglue.net/cecilsharphouse

What a great way to kick off the traces of Winter and a great place to throw away those inhibitions. If you can’t sing or play a musical instrument, just get out there and clog dance! And if you still feel shy and need further convincing to hot foot it to CSH ..take a listen to the classy contemporary celtic music lineup ..some real treats in store! I also can’t wait to hear the medievally inspired Bragod live.

Why not treat your mother for Mother’s Day? Take the entire family! A fun day is inevitable as  I suspect no one will be able to stay on the sidelines for long! I hope the cafe is open ..I’ve had some great food @ CSH.