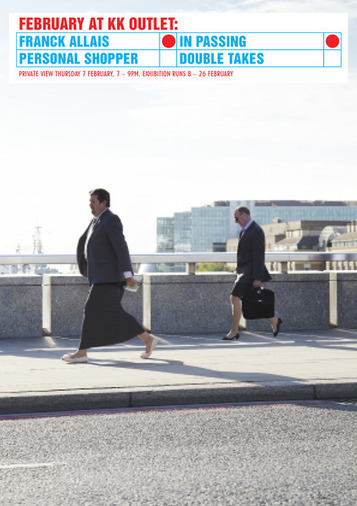 KK Outlet is proud to announce the first solo show of French photographer Franck Allais. In Passing will present two of Allais’ projects that encapsulate his skill of taking a simple concept and executing it with his trademark flair and wit.

Opening the show, Allais presents Subverting The City – a collection of images featuring city boys dressed in drab conservative clothes from the waist up but who are a little more flamboyant in skirts and heels from the waist down. The composition of these images are so seamless and their motion so natural that you have to look twice and call your judgment into question.

In Passing, also features The Weight of Words. Originally Allais wanted to create a series about the movement, sound and chaos of traffic. After setting up his camera on a tripod and taking photos of passing traffic, Allais noticed that he was ignoring what should have been obvious: what was written on the vehicles. “Instead of seeing vans and trucks, I saw words floating by like a visual  dialogue, messages bombarding my brain that were instantly forgotten. I realized I had hit on something both playful and disturbing.”

Brands are ubiquitous; they are the pollution of the built landscape. As a visual language they make everywhere familiar. Brands are the reason why all British high streets look the same and why when you fly halfway round the world on the surface it’s all the same.

The suspended brands and see-through promises in Allais work remind us that no matter where we are there’s always someone trying to sell us something.

Allais’ work asks the viewer to suspend disbelief, whilst at the same time questioning what is accepted as the everyday norm. He does this without being judgmental or dogmatic. Most of all, he does this whilst having fun.

only a few days left to see this intriguing exhib! closes on 26th Feb